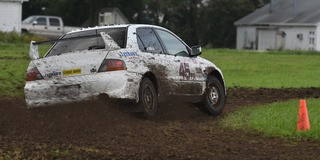 Everything in the world looks a little different right now. As such, it’s fitting that the 2020 DirtFish SCCA® RallyCross National Championships were thrown a bit of a curveball prior to registration opening, forcing a venue change to Heartland Motorsports Park in Topeka, KS. This isn’t a new site for the event though as many participants will remember the day one rain and day two mud that caused challenges in 2017 at the same venue.

It may be a bit premature to count on just yet, but the forecast looks dry for competition days with some morning showers predicted for Friday as teams arrive. High temperatures in the mid-80s should provide ideal driving conditions throughout the weekend.

The event may look a little different, but over 100 competitors will still have the same goal as always: Claim one of the nine championships up for grabs. Let’s take a look at what to expect from each class.

There isn’t a previous National Champion present in the Stock Front field, unusual for the highly competitive class. Fresh off a win at the only DirtFish RallyCross National Challenge in Ohio, Hal Denham should lead the way in Stock Front with perennial trophy winner Keith Lightfoot surely in the hunt.

There are two past winners in the Stock Rear field, 2017 SR Champion Sean Grogan and multi-time Champion Mark Macoubrie. The excitement here is going to come as Macoubrie transitions from his normal Prepared All ride to the new-to-him Porsche 911. Worth highlighting are two local favorites we usually see at the top of their classes on pavement. Joey Green and Brian Tefft, Jr. seem to be taking their E Street battle to the dirt and should provide plenty of entertainment.

Last year, Josh Armantrout took the Stock All win over Jan Gerber and we expect those two to pick up where they left off and continue the battle. Noah Quick was just one position out of the trophies last year, but based on a runner-up performance in Ohio, we expect him to improve on that finish this year.

There are some familiar, and fast, names signed up in Prepared Front. With a new motor in the car since last year, reigning Champion Jim Rowland will try to defend his title, but Robert Seelig has plenty of Nationals trophies to prove he’s up to the task. A few names to keep eyes on are two new class contenders who’ve seen success in SF: Warren Elliott and Matt Wolfe.

San Miguel Gonzalo will be defending his title in Prepared Rear with last year’s runner up Shawn Roberts also returning. While the field contains the normal cast of characters, it’s worth watching brothers Mason and Connor Herrick in their first RallyCross Nationals appearance after aging out of Junior Karts in autocross where they were constant contenders.

A relatively small field in Prepared All leads us to expect Mark Hill to cruise to another National Championship here. Tristan Koivisto and Mike Coons should continue a close battle started last year.

With many of the regular front runners in Modified Front missing, this could be a really exciting class to watch. ZB Lorenc is the favorite to win after a fantastic performance at the Ohio National Challenge, but it’d be foolish to rule out the rest of the field.

As is to be expected in RallyCross, Modified All is the largest class represented with 16 entries. With Lorenc moving over to FWD, 2019 runner up Todd Briley probably has the best odds this year, but it’s going to be a great battle with Kent Hamilton jumping into Jonathan Olschewski’s Isuzu Impulse and plenty of talent throughout the field.

It’s not too late to join the fun! As of the writing of this article, there are spots remaining and online registration remains open through August 11 at 6 p.m. CDT. Registration will be available on-site with an additional fee Friday, August 14 from 12:30 pm to 4:30 pm

Live timing and audio coverage of the weekend will be available at rallylive.scca.com. The complete schedule of festivities and additional resources are available here.